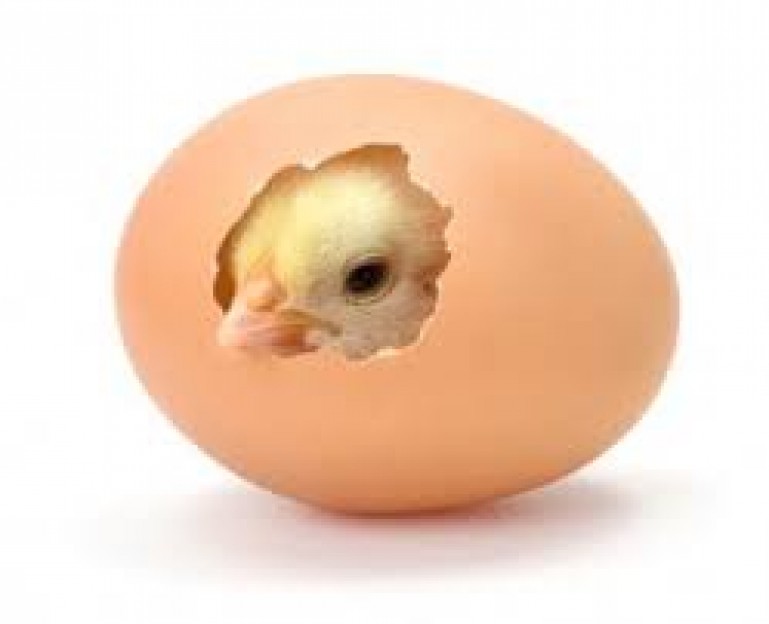 Change, for the better

We had worked so hard, that we had zero motive to mess this chance up. So initially we shut the premises for a few months while we plotted & schemed. Once our plan of action was in place, we then we reopened it in Summer 1993 under a new name.

That name was The World Headquarters. 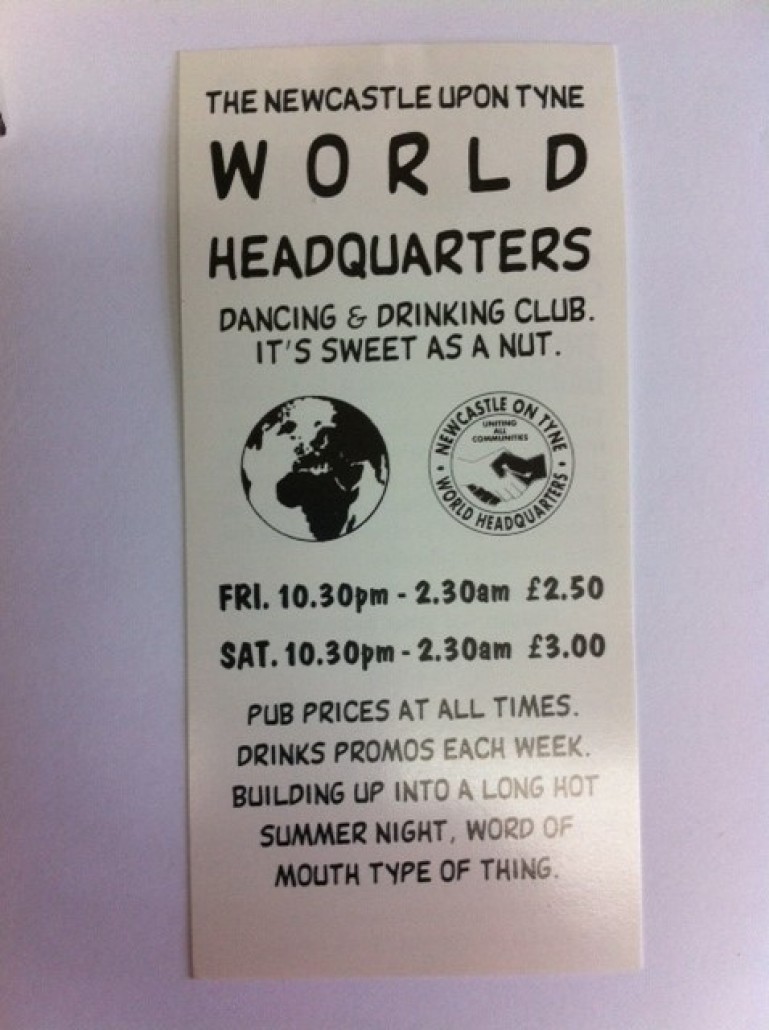 We had proper self belief, real confidence & we had our plan. One based on everything, everywhere we had ever played had taught us. About music, atmosphere, security, but most of all - About how not to run a Club.

So we didn't need any of these.

We didn’t court the media & had allowed the venue to drop totally off the radar while it had been closed. We kept our mouths shut as well. These were still very dangerous times. We then started to build it, ever so slowly, through our network of close friends, on a whisper & a handshake. Old Skool - from the bottom up… 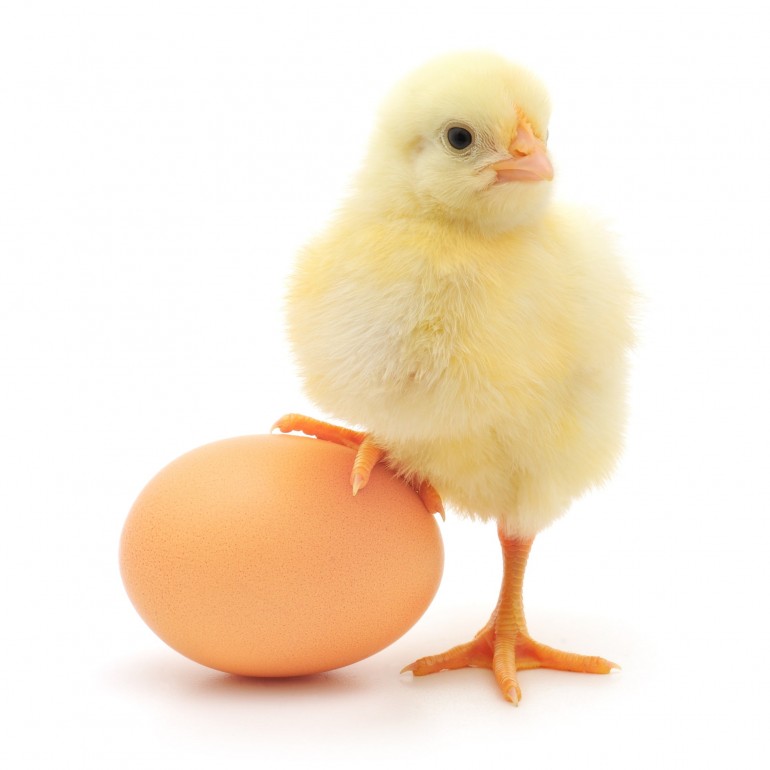 Dangerous times indeed, but we were determined to boss it, now we had arrived.

We always wanted to offer something that was outside the mainstream & we reckoned the only way to do that was to build a viable, credible, cosmopolitan alternative to it.

That alternative had to exist totally on its own terms, totally separate from the rest of the city’s scene & that fact had to be clearly relayed to people. That way they would know that the Club was different, special & always there as an alternative to mainstream twaddle, if they wanted it. 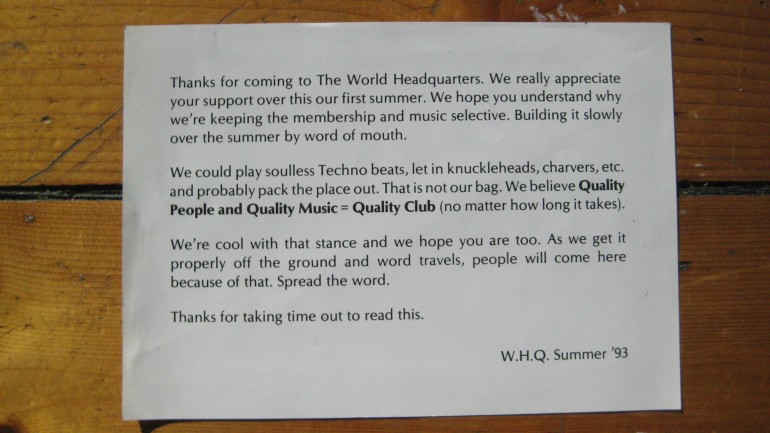 The first ever World Headquarters flyer. Bit more of a 'manifesto' really, looking back at it now. We just wanted to be clear on the direction we were setting off in.

Obviously it also needed to be safe, commercially successful, musically on & it had to be good fun to be a part of.

We came up with the name World Headquarters as we thought it sounded ridiculous, bearing in mind just how small the building it was in, actually was. It was really just a tiny terraced house, but the name made it sound like a massive thing, which the idea behind it is. 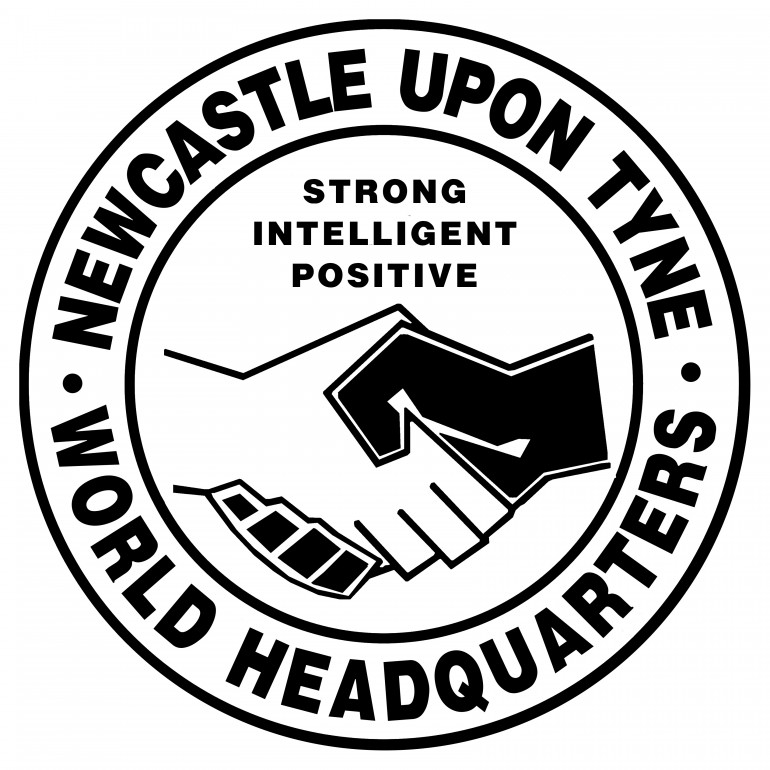 World Headquarters logo has also been tagged with 'Uniting all communities,' but this one is our favourite.

Sort of like the World Famous Trent House hustle, that we broke down for you, way back in the yarn.

We felt that it reflected the musical remit of what we had planned & also we thought it just sounded kinda cool. From the minute we came up with it, we knew it was a total winner – A bomb name. 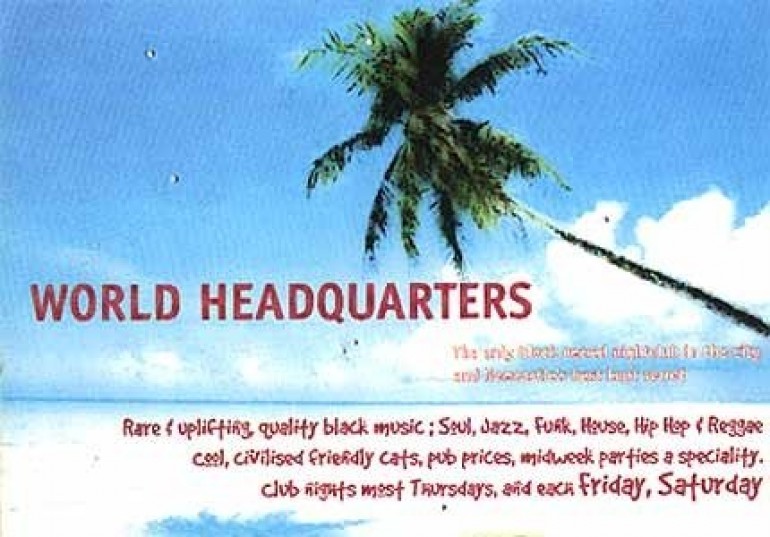 Supa-early, grainy scan of an original WHQ flyer - circa 1994.

Planning to Make it Secure

The first problem was dealing with some of the more extreme radgies who had frequented the place towards the latter days of Afrika. We knew from the Trent exactly what fighting racists all the time meant & we now had to have a strategy that could secure the new Club, so we didn't end up doing that every night.

We were the only Black owned leisure businesses (other than the Trent) north of Leeds, so it didn't take Columbo to work out we needed to seriously watch our backs. 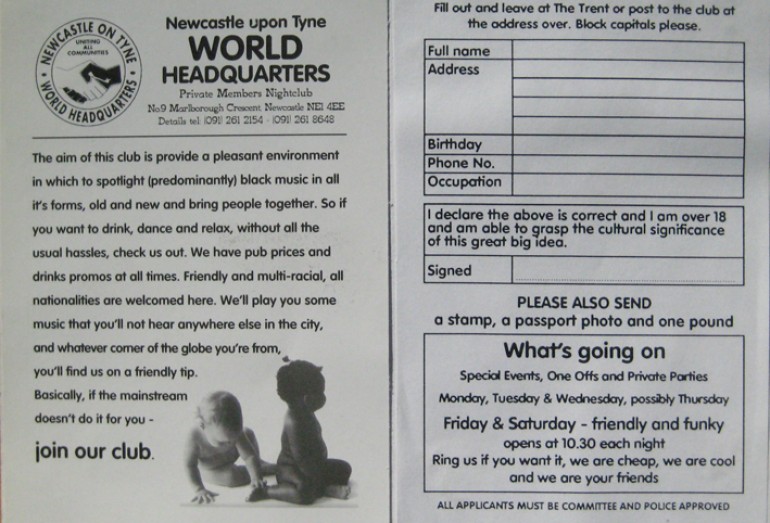 By closing it for 3 months all the nut-jobs just drifted away. There was so much drug action happening on the dance scene now all over the city, that there was plenty to keep them occupied elsewhere. We also concocted an illusion around the membership system, advertising on flyers (see above) that the police were going to vet all members, which was naturally, absolute nonsense.

It was amazing how those two simple plans shifted all the undesirables as if by magic… Just like that..!

We changed the layout as well, to erase all memory of Afrika's many design failings & make it way more clubby, moving the DJ booth from it's original daft, top of stairs position, to the far end of the room.

We put the bar directly where the booth had been so that as you walked in the Club, the bar was directly facing you, all albums covers & quick service. Tinkering complete, we were happy with the layout & felt it worked well. 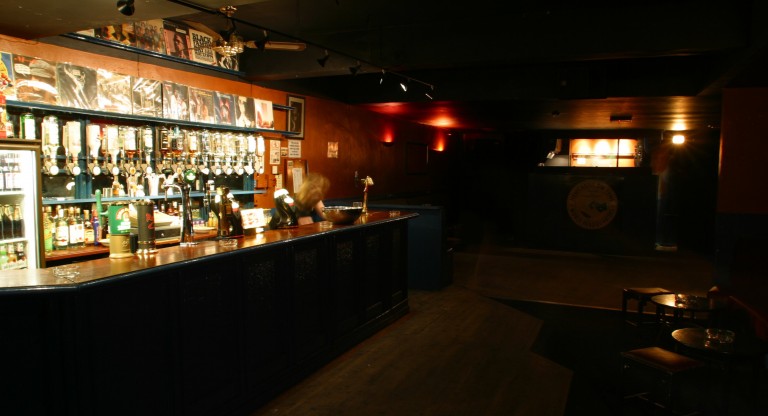 Our original winning layout at Marlborough Crescent, was the blueprint for the layout we still have today upstairs in WHQ @ Curtis Mayfield House.

Our Brother, Steve Caulker, who had run the door at the Riverside Club for years came on board, bringing with him a young guy called Dave to work the door.

Yup, it is the exact same Dave who still runs all our WHQ security today & yet another fine example, of that old WHQ continuity. 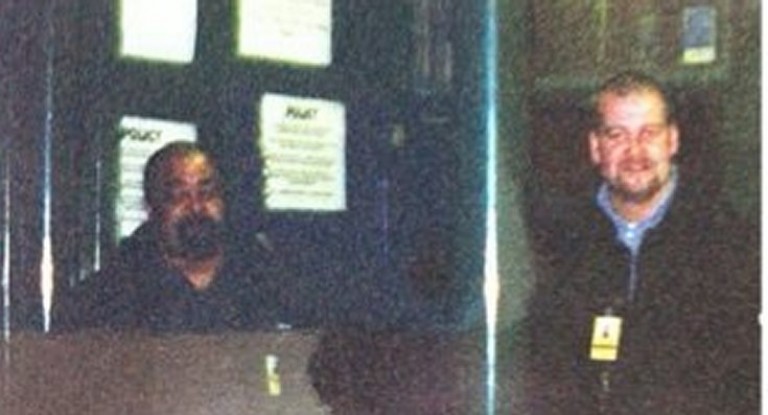 Wor Stevie & Wor Davey back in the day, back on the door of the Old Club.

Most Nightclubs open for commercial reasons, WHQ whilst always a proper business, didn’t really develop from that type of commercial standpoint. To escape the racism, Club violence & druggie madness of the early 90’s we had to start our own place.

We didn’t have an option if we wanted to keep moving forward, stay playing our music, keep our crew safe & carve out a chance to effect the city in a positive way. Things had to change & we wanted that…

More importantly, because of all our mad experiences we wanted to be that change. 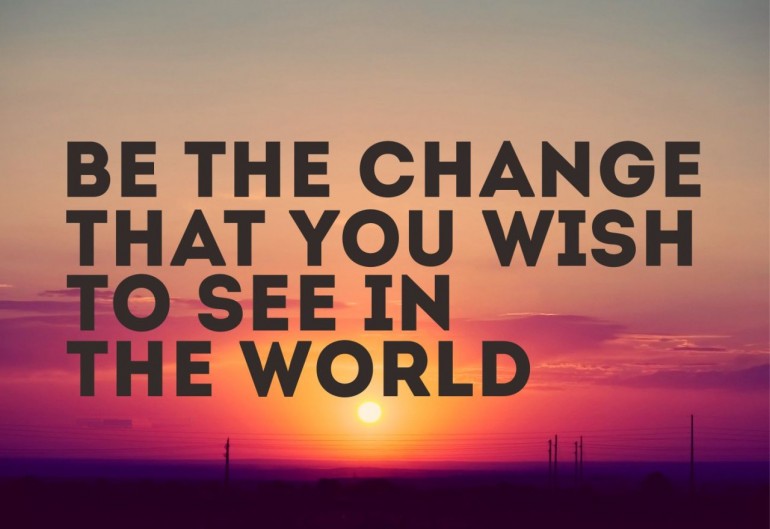 So World Headquarters came from the Soul & was created out of necessity. We had to have somewhere to protect & stand for people like us & cater to the stuff & diversity that we were into.

When we say that we don’t just mean musically, we also mean that in terms of ethos, politics & the fact we didn’t want ourselves, or our friends to ever get abused, arrested, smashed heads, or stabbed on a night out.

We were now almost ready & spread the word to people, that it was finally on. We put all of the vast experience we had accumulated to date into it & were 100% confident it would work. By this point failure didn’t even occur to us.

But the consumer demand WHQ has now created in 2022, was not there on anything like the same scale, back then in 1993 when we first opened.

The Club’s initial market was just us & our close friends. Realistically all we did at first, was start to run a regular party for those friends & it just kinda grew beyond our wildest dreams.

Getting ready to spin for some chums.

The plan was to rely on the fact that playing great records, being friendly & the Club having integrity, really would be enough & make our friends recommend it to other cool people they knew.

We based the entire thing around the music, our friends & the fact we were gonna keep it completely drug, charver & trouble free. We believed in ourselves & gave it time.

Decades now, if you think about it.

We just wanted a place anyone, from anywhere in the world would feel welcome. A place we could fully control, so we weren’t risking arrest, or at the mercy of crazy doormen & all the radgies on the early 90s drug scene anymore.

Just that one chance to shine & to have great tunes, that was all we had ever wanted. 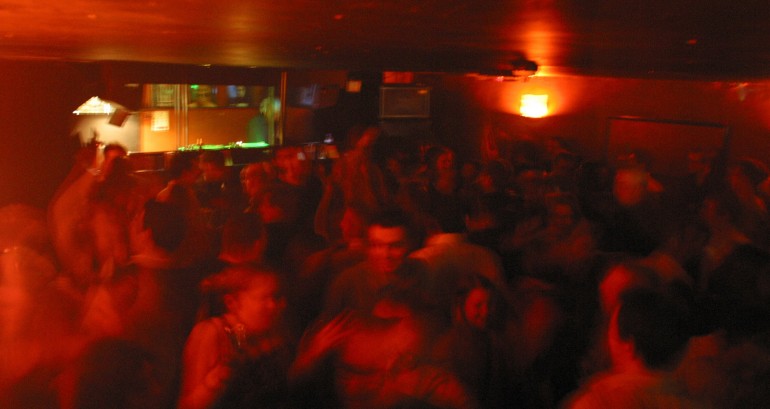 The Original WHQ on Marlborough Crescent - packed as ever, warm as toast.

We had faith in ourselves & knew that sticking to every aspect of our original plan from day one & ignoring all commercial pressures & city trends, would allow us to carve out a little niche.

That could then grow organically over time, simply through word of mouth & World Headquarters Club as a 100% self determining,  independent musical force - could work. 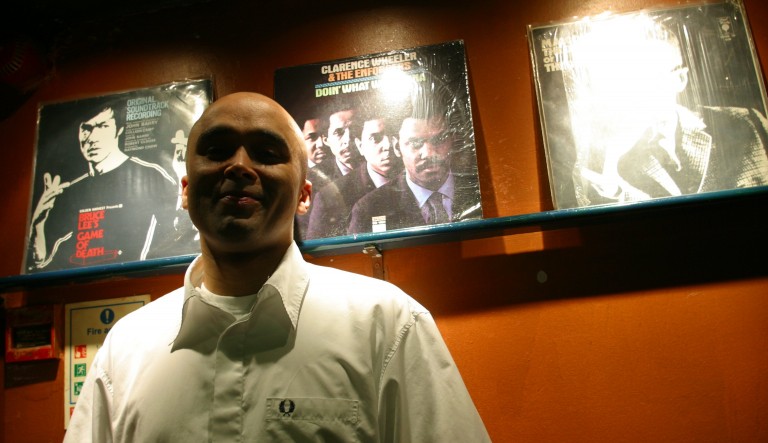 We knew now this was our chance & if we just remembered all we'd learnt over the years & stuck totally to our plans, this thing could really take off…

Guess what happened next…? 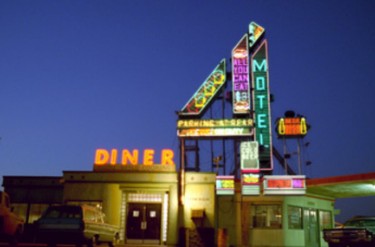 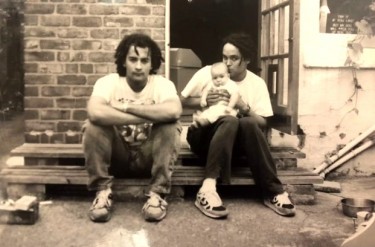 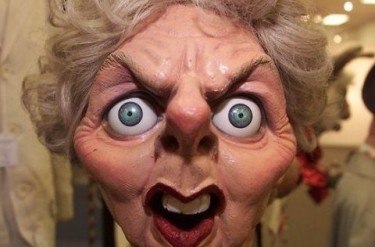